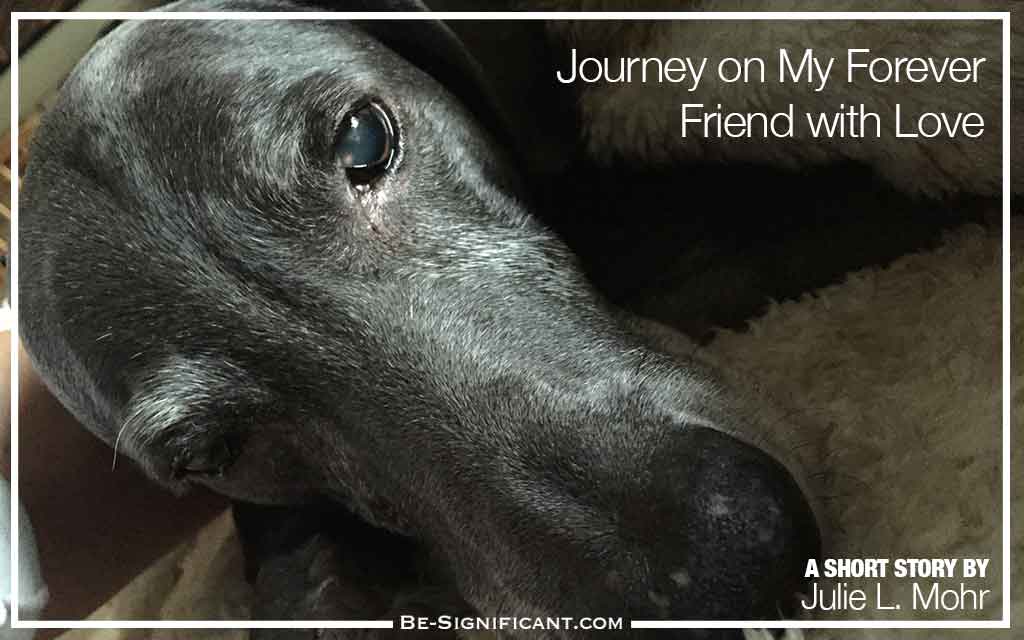 Rapid Decline of My Dear Friend

Over the last two years, my family and I have been caring for a senior dog. I never knew this side of caring for a pet. It isn’t spoken about when you purchase a puppy; what it is like to care for the dog in its later years. All you are really thinking about is how much to feed the puppy, what shots he or she will need, and how to integrate the new needs of the puppy into the lives of the family.

Blue began to decline nearly three years ago. She stopped responding to verbal commands and we would notice that she would walk into things like the sliding glass door. With limited sight and hearing, the only way to get her attention was by clapping your hands. She didn’t come when you called her. She no longer ran to the door to greet you when you came home. Often when I would pet her, my touch would startle her and she would jump, not knowing that I had walked up to her and sat beside her.

I had never heard of doggie dementia. Blue would have panic attacks nearly every evening that began with pacing around the house and trying to dig into small spaces – one of her favorites was to try to dig into the small space between the toilet and the bathtub. We knew she was finding her final resting place, trying to find something familiar in her life, a place of comfort. I jokingly called her “Sonar” as she would make sure you were still there by nudging or tapping you with her cold nose. At night she would follow me from room to room, not wanting to be alone for very long.

Over 2 years ago we removed all the carpeting in our house and exposed beautiful wooden floors. Then we had to put carpets all over the house again because Blue could not stand up without help and would fall as she simply walked around the house. Those carpets are all now soiled and stained with the accidents of life with my aging friend.

Other odd habits were that Blue began eating things that she shouldn’t eat like dirt. I can’t explain why she did and neither could her vets. But to keep her from eating dirt, we had to accompany her outside at all times and keep her from eating the endless supply of dirt in the drought conditions here in Northern California. Blue’s habit of eating dirt meant that she had to be hospitalized one weekend in July of 2015 as they pumped her stomach to remove a blockage. She nearly died that weekend, but surprised us all by pulling through. Her muscle control slowly began to decline as well. One of her back legs would shake nearly every time she stood. It made it hard for her to eat her meals; which she painstakingly ate one piece at a time, removing kibble from her bowl to the carpet before she would eat it. In the last months of her life, her lack of muscle control meant that we would have to hold her up when she went to the bathroom outside and help her up and down the three short steps to the backyard. If you didn’t hold her up and give her back legs support, she would sit in the dirt and go to the bathroom which meant you would have to wipe her bottom when she was done.

I built her assisted living devices too. She loved to snuggle with me in my king size bed with Redd our other dog. But she could no longer climb or jump onto the bed. At first, I built her a step and when she continued to lose her balance I built a platform that she could completely stand on before stepping onto the bed. We built one for the couch as well. Blue’s Homebuilt Platform for Getting on Couch September 2016

In just three short months she couldn’t even step up onto the small platform and instead, we bought Blue a bed for a princess that allowed her to comfortably sleep on the ground. At night Blue had what I can only describe as hot flashes. She would begin panting and would not rest until I put a fan on her to “cool” her down. It was amazing how quickly the fan calmed her until she could finally rest. I also had to rise at least once if not twice a night to take her outside. She couldn’t make it through the night without using the bathroom – and it usually meant you had to rise quickly to make it outside before there was an accident.

We could no longer give her heartworm medicine. Her kidneys could not handle the poison. The last time we gave her the medicine her stomach swelled, she laid for hours in pain, simply drooling until her body could remove the poison from her system. She almost died that weekend too. We made a bed for her in the garage and I laid with her for hours until she finally stood up and wanted to walk. She fought for life that weekend and lived for at least another year.

In the last few days, she did not want to leave my side. She even tried to jump up on the couch to sit next to me while I watched football. Her body no longer strong enough to leave the ground, she bounced off the side of the couch and fell to the ground. I picked her up and placed her old and tired body next to mine on a warm blanket where she rested with me for hours. Her last days with us gave us time to say goodbye but also filled me with so much doubt. Was she ready to go, ready to leave her people family and journey to her resting place?

On her final day, Blue stopped eating her food and drinking water. She couldn’t rise out of bed. I had to use a towel around her stomach to pull her up to her feet, every hour and a half to help her outside to use the bathroom. She still smiled at us and played with me despite her body giving up before her mind was ready. As she continued to decline, I found myself so confused about what was the right thing to do. Her care had become my life. Every day and evening was completely planned around her care. I had to make sure that by letting her go, I was not doing so because it was becoming too much to handle but instead was because she was truly ready.

In these final months, I was closer to Blue then I had ever been before. I woke instantly as soon as she stirred to help her rise up. I took care of her every need, my children took care of her every need. And it was just simply time to let her go. I was not prepared for what it took to care for a senior dog, I was even less prepared to let her go.

I had hopes that we could share one final Christmas together when the family gathered around to watch Blue open her presents. It was the highlight of Christmas for the last 15 years.

The gift Blue gave to me over the last 16 years will never be forgotten. Sleep my dear sweet Blue. You were loved and cherished as a puppy and you were respected and treated with dignity in your death. And my family and I were stronger because of your unconditional love.

About the Author:
Julie is a dynamic, engaging change agent who brings integrity and passion to everything. Through her books, articles, speaking, consulting, and teaching — her purpose is to change the world through thought-provoking dialog and interaction.

This site uses Akismet to reduce spam. Learn how your comment data is processed.